I’ll be honest with you, the last time I wrote an interview was for my riveting high school journal. Therefore, I approached this “interview” as more of a discussion. Before this discussion happened, I had a chance to hear the band live, and have a listening session of their recorded music. Because of this, I skipped all the introductory excess and got right to their music.

Before they were Rocket McFlyy and The Free Radicals, they were Organized Khaos, and before that, well, I’ll let them explain. The first time I saw or heard of Rocket McFlyy and the Free Radicals was May 2013 at a battle of the bands here in Detroit. Rocket McFlyy includes Rocket (piano/vocals) and McFlyy (rapping/vocals). The Free Radicals, also known as their live band of brethren, consists of Michael Moore (guitar), B (drums), and JAWZ (bass guitar). It should be noted that Rocket McFlyy not only produce their own music, but also write and produce for other Detroit musicians. Unfortunately, B wasn’t able to attend the interview, but his bandmates were sure to acknowledge his importance to the whole.

One thing you will see if you visit the band’s website (http://smcflyy.wix.com/rocketmcflyy) or twitter (https://twitter.com/rocketmcflyy) and read the bio, is a large illustration of Rocket and McFlyy standing atop a pile of alien robot carcasses, and holding space weapons. There’s a visual element to Rocket McFlyy and the Free Radicals that should not be overlooked; It was clear that some visual art work was necessary. I refer to my “art box” in the interview, which is essentially a place where I keep art supplies ready to go. You can see all of their visual representations of their music below.

For me, Rocket McFlyy and the Free Radicals’ music is a complete experience. There’s a lot of sound, concepts, emotion, and energy behind their work, and I can only hope that this discussion captured a small part of that.

So let’s get started. Turns out all you need is a little beer for a band to be comfortable around a crazy little gal from Detroit. Cheers.

CL: One of the things I’m confused about is your studio versus your live show life.

MM: We’re actually doing a full recording right now that will resemble more of the dynamic and sound of the live performances.

MM: On the recording or live?

CL: Both. I think you guys are a totally different entity live.

MM: Which is a good thing. I think when Rocket showed us his recordings individually we all thought, “Well this guy has his act together.” And then we started playing live and things quickly progressed into what they are now. We added the drummer that we have now (B) which has really pushed things forward.

R: B is very classic, but contemporary. As far back as the African dance element, he can nail it. We did a show last week and it was hot. We were about to do this song and he didn’t wanna do it because he didn’t have his tom-toms. “I need my Toms man! I need my Toms!” Like, he gets DOWN.

CL: Yeah he does get down, I remember that. I have a very vivid memory of the first time I heard you all live. Which was an experience. I do agree that B brings a whole other rhythmic energy to your music. It’s different than the energy in your studio music.

MF: Yeah I think everybody in the band does that with everything, in relation to the studio versus live stuff. When we play live, JAWZ’s bass is gonna be way more dynamic. Michael’s guitar is gonna be legendary, as opposed to just awesome. 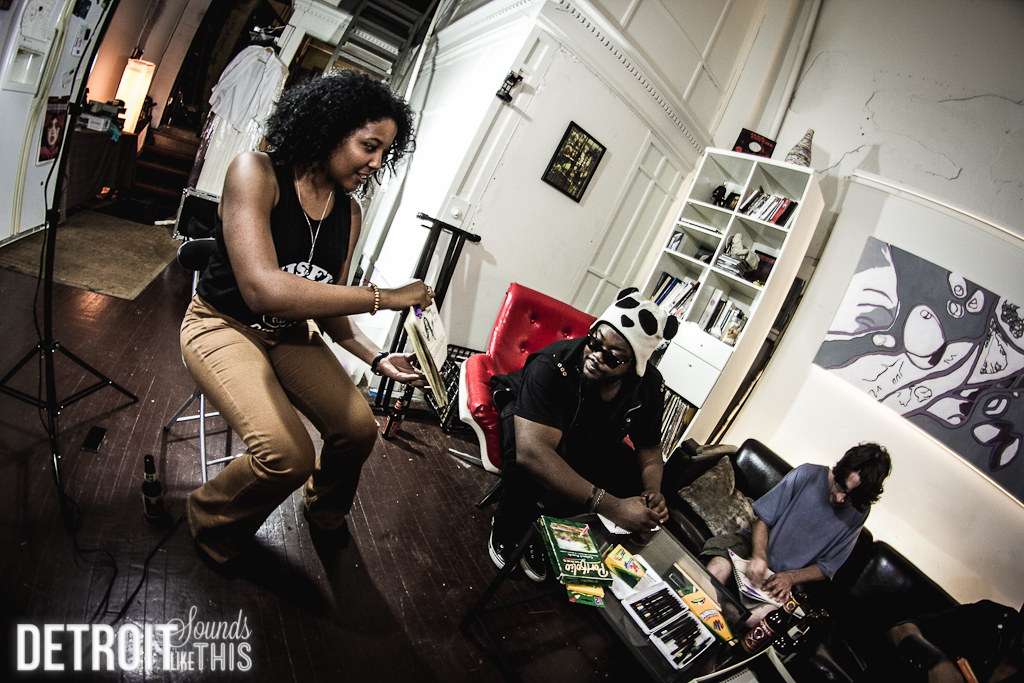 CL: I want to ask, in a general sense, how you all got together.

MF: Me and Rocket met in high school. We were in an a cappella singing group, which I hated, but Rocket made it awesome. Rocket came to me one day and was like, “Dude, I wanna do rock music with hip-hop drums.” and I was like “Bro. I can’t sing that shit, man.” So when we started this rock shit I was like, “Dude, I gotta rap.” So I started rapping.

MF: Everybody laughed at me and then we did a bunch of studying and shit and I got better at it. And then JAWZ came in once we hit Organized Khaos, which is when we decided to do rock music.

CL: You guys are like a whole three course meal of music. There’s so much to hear and experience. That’s why I bought my art box because there’s a visual component, there’s the music, there are the concepts behind the music, and the whole website is a whole other thing. Everything there made me curious about your inspiration. Besides music, what are your influences?

MM: It’s ironic because for me there is no God, but I have beer.

CL: Explain to the people what DREAMWEAVER is.

R: It’s an entity and an idea for us. It’s so much more than what it is. We live in a country where there are so many drugs that are just dangerous for you that you can get over the counter.

CL: Since the blog is called Detroit Sounds Like This, tell me about your Detroit musical influences, your favorite Detroit sound, anything. Expand as much as you want.

MF: RenCen CoolBeanz is one of my personal heroes, locally.

R: I don’t know. Detroit sounds like world music to me.

MM: That’s actually really well put. That’s what I loved about Detroit growing up. It was mostly Motown but it was also really great hard rock. Really great rock and roll that you couldn’t hear anywhere else. It also had a special groove and a special anger.

MM: There’s a certain anger to Detroit rock that I love to this day, and I still think that per capita, there are just better musicians here. I was just talking the other day about traveling to cities that are “economically healthier,” but the music scenes just don’t seem vibrant, or they don’t pull you in. There’s nothing there, you know? It’s a Saturday night at 10pm where’s the jaw dropping show? In Detroit you can find a couple of those things going on, and it’s like, where else would you see this? 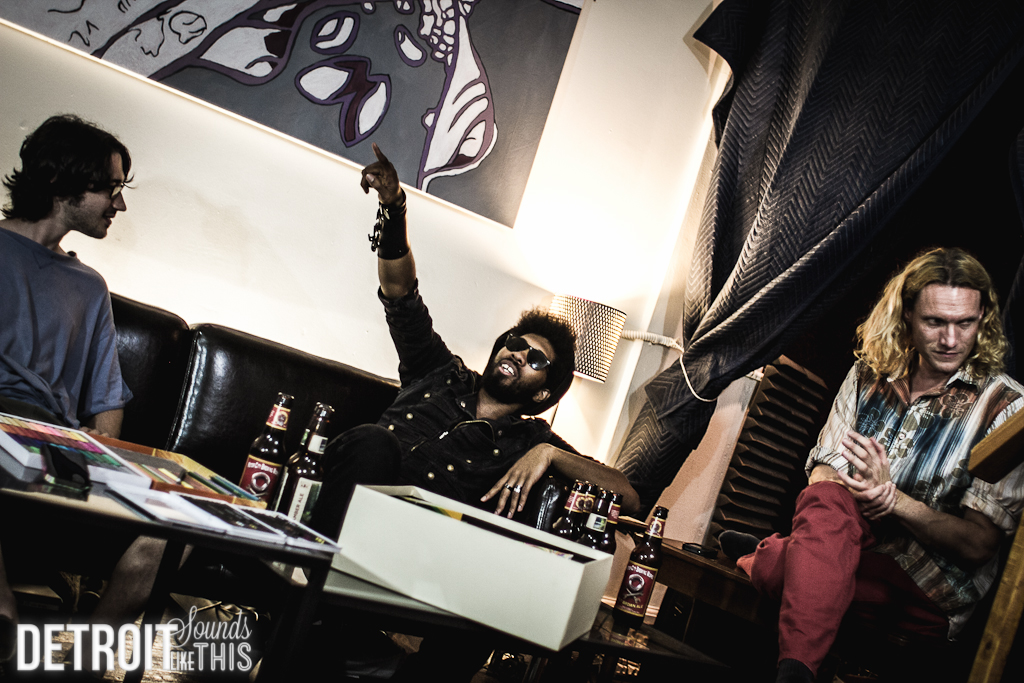 MM: One thing I’m really proud of Detroit for is even with all the economic turmoil and chaos, it really kept a strong sense of artistic creativity.

R: Detroit has a heartbeat, and it’s growing, and I really believe that. It’s an irregular heartbeat, too. It’s funny that Michael would talk about the musical demographic, especially as it pertains to live performances, because everywhere I’ve been, they don’t do it like they do it here.

J: We invent the world’s greatest music. Techno came from here first. Even the more obscure shit like second wave punk came from Detroit first before it came from Seattle.

MM: In the late 90’s there were three of the world’s biggest indie-prog bands from here. I was in House Of Usher. Discipline was also out of Detroit, and Tiles was big in Germany and is still going strong.

R: In Detroit, generally speaking, it’s nooks and crannies with huge amounts of energy coming from them. At this one SPOT in a vacant warehouse, or artsy loft, or you know, some dope after-hours joint, there’s just space around it. But the inside is exploding.

CL: Self realization is so important, and until one gets to know oneself it kind of floats. I remember Rocket telling me that before you had the Groove Theory (which is essentially a theory for creating the sound of Rocket McFlyy and the Free Radicals), you had a spectrum of “yes” and “no.” Until you focused it, and until you realized your musical signature, you didn’t get the constant “yes.” I’m asking if you’re aware of your musical signature, and if you could describe it.

MM: Well I actually think I have a very Buddhist relationship with my guitar playing. It’s just something that I do. It just happens. Sometimes I feel very connected to it, but sometimes it just happens and I’m just an observer. It’s a very dissociative type of act.

CL: It’s without the ego of it all.

MM: Yeah, and in terms of individuality; I’m standing on the shoulders of multiple generations of people whom I’ve simply studied and struggled to incorporate, and it would take a really really fine ear to hear that, and I don’t think most people do. But maybe I’m underestimating their intelligence.

CL: You don’t think most people hear what?

MM: Anything identifiably me. I think they hear a big loud guitar. I don’t think they really get it, to be quite honest with you. I think I can be very flashy and very showy and it looks good. I don’t know if they really…

J: Get what you’re doing.

MM: Get what I’m doing. And it really doesn’t matter if they do or they don’t on that level to which I aspire. It’s okay that they just find it entertaining.

CL: That’s a really interesting point, because I don’t know you. I don’t know any of you, and you don’t know me. But when I listened to you (Michael), maybe I didn’t hear you or your musical signature, but I did hear something that you expressed.

MM: That’s totally valid. My experience of it is actually quite Equalist. I play notes, I’m listening, I’m reacting, I’m kind of thinking of my job as more of a craftsman.

J: Michael puts a lot of color into the band.

MF: When I’m starting off cool, I follow JAWZ or B, because I know they’re gonna give me that beat. But to turn it up, I’ve gotta follow Michael to catch the intensity. Rocket is my opposite on stage in a lot of ways, and my equal. Rocket is pulling as much emotion out of the rhythm as possible and I have to pull as much rhythm out of the emotion as possible (laughs) and that’s where we landed.

J: We all definitely have a very concrete roll in the band, and almost a totally different perspective of what’s going on. Especially during the live performances. I have a very different approach than Michael.

CL: What is your approach?

J: I like to sit back, listen, and have a conversation musically with B. Really listen to what he’s doing, and what his groove is, and just feel the bottom line of the song. Where should I be? What is the most supportive note? Should I do something different to support what Rocket is doing? But I have to keep everything super solid, and it’s all about the groove and making it feel good. My influences as a player: Bootsy Collins, Marcus Miller, Victor Wooton…

CL: Is there anything I’ve not asked or we haven’t talked about that you view as essential to your musical expression?

MF: I want to over emphasize Marijuana. 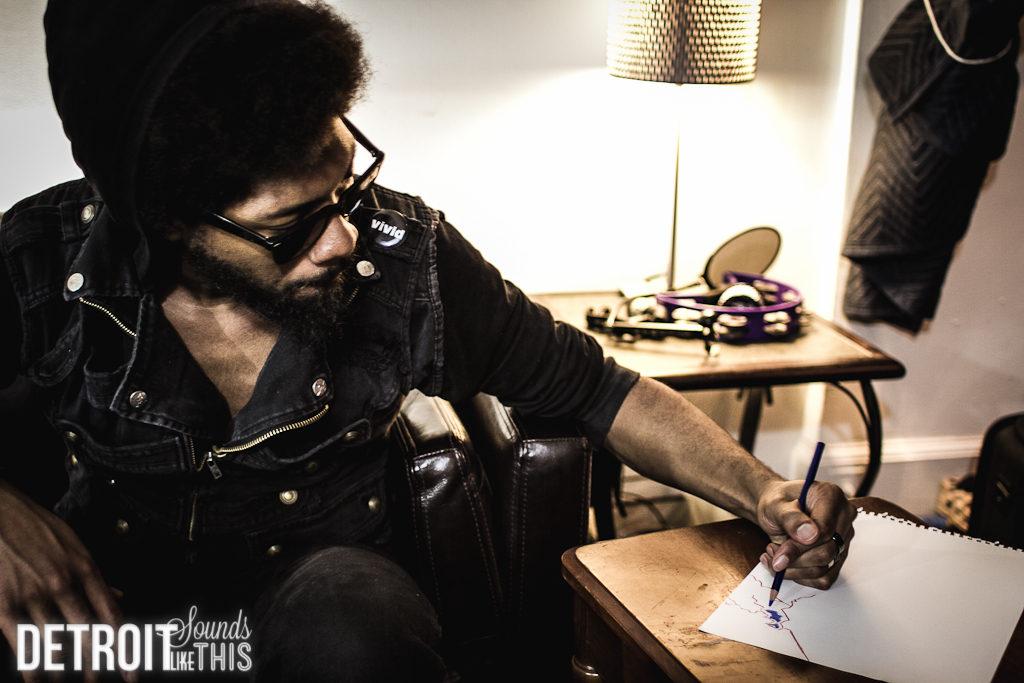